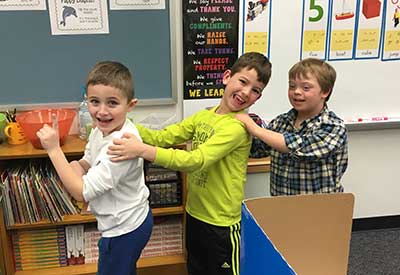 On behalf of all students with Down syndrome and other disabilities and their families, the Montgomery County Down Syndrome Interest Group (MCDSIG) calls on the Wissahickon School District board to reject the proposal to build new Autistic Support classrooms until its administration can clearly demonstrate that it is meeting the needs of students who can and should learn successfully in general education classrooms. We do not believe it can demonstrate this at present.

In February and March 2019, three separate rulings held that the Wissahickon School District had violated students’ civil rights, including their right to a “Free, Appropriate Public Education (FAPE)” by moving them from general education settings, where they had been making meaningful progress, to Autistic Support classrooms. In addition, the Wissahickon School District has failed to provide independent data demonstrating that the Autistic Support classrooms are being built in response to the specific learning needs of its students.

In a public meeting on May 28, Quinn Hall, father of two children in District schools, including one who has Down syndrome, asked the Wissahickon School Board to add up the money the district spends every year “in settlements and lawsuits defending narrow special education practices.”  He went on to propose that “augmenting inclusive supports for students with disabilities in their neighborhood schools is actually more economical than investing in so many separate autism support classrooms.”

In that same board meeting, several public comments addressed racial and diversity issues in the district, specifically to achievement gaps among black and Hispanic students. One public commentator said, “We need to create a climate in the classroom of high expectations. When you set the bar low, you have low expectations.”  Schools that have inclusive teaching models are set up to address these kinds of achievement gap issues.  Inclusive education can positively impact all students and represents and investment in all students in the District.

Every student has a right to belong in their neighborhood school, and to access the general education curriculum. Evidence-based research, encompassing hundreds of studies over the past 40 years, demonstrated that students have the best long-term outcomes when they are included in general education classes, with the supports and services they need.

Research also suggests that all students reap emotional and academic benefit from classrooms that expose them to a diverse range of capabilities. No study has ever shown greater benefits of learning in a separate setting.

MCDSIG encourages all schools in Montgomery County to institute inclusive education practices, which involves shifting existing resources within the district and changing professional mindsets.  Special education is a service, not place.

“Inclusion is built on the premise that all students should be valued for their unique abilities and included as essential members of a school community,” says Julie Causton, Ph.D., co-founder of InclusiveSchooling.com. “Inclusion is not a place; it is a way of thinking. Moving some students from special education settings to general education settings is merely a first step to ensuring supported and successful inclusion for all.”

To view the video stream of the May 28, 2019 board meeting public comments, go to the time count 1:12 at https://wissahickontv.viebit.com/player.php?hash=a8WoN1GCVU2j